Advertisement
You are here: Home » What is Mongoose OS? How it Works With Different IoT Cloud?
Advertisement

What is Mongoose OS? Mongoose OS is not an OS per-se but a user space. It is a Firmware Development Framework for the IOT. It supports microcontrollers such as ESP32, ESP8266 to provide a browser based local computer environment for prototyping, development and managing IoT devices. Mongoose OS is developed by Cesanta Software Ltd and has an open source version with Apache License. Mongoose OS is recognized by Texas Instruments, Espressif Systems, Google IoT Core, AWS IoT, IBM Watson IoT, Microsoft Azure IoT to name a few. Some of these cloud IoT service providers has “starter kit”.

Mongoose is one of the known embedded web servers currently available. It can setup WebSocket Chat, RESTful Server
Big Upload, MQTT Broker and Client, Captive DNS Server and so on.

Installation is not big deal. Usually that part involves downloading an executable and clicking it. Mongoose-OS what calls “mos tool” is Web Browser based, runs as local server at http://127.0.0.1:1992/, also has a cloud server dashboard at https://dash.mongoose-os.com/.

But the question is that : why use Mongoose OS when we already have Arduino like IDE or supports Micro Python? That has not much answer. It seems they handle OTA, temperature sensors and targated who are comfortable with Javascript. The founder’s interviews make the target clear :

“Mongoose OS’s primary target are professional firmware developers and companies bringing connected products to the market.
That said, Mongoose OS is quite appealing for the maker community, because it has JavaScript engine for rapid prototyping, hassle-free build toolchain, libraries and example apps that can be reused, and more. We believe that Mongoose OS is even easier to start with than Arduino IDE, because of the JavaScript.” 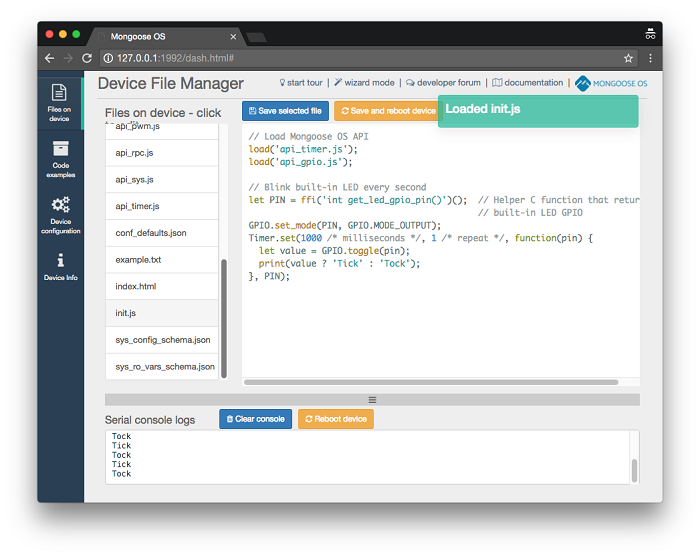 New thing which Adafruit does not give emphasis it better to avoid (for a maker) investing time. If you want to test some of their ready to use app then that effort has some meaning. Mongoose OS probably good for the targated audience. It is unlikely to have huge projects available everywhere. ESP32 is too powerful and Arduino IDE is funny in front of ESP32.

This Article Has Been Shared 221 Times!

Articles Related to What is Mongoose OS? How it Works With Different IoT Cloud?