This is not-so-formal article to introduce to ESP32, NodeMCU, Adafruit Feather to the users who are not that much used with the boards. ESP8266 has wider range of models and ESP 01 commonly seen as cheapest. Writing few guides on ESP8266 (ESP 01) is for normal for any technical website but in real life, using ESP 01 not easy. It is backdated, not exactly designed to be used with Arduino board as module! Actually we should use the USB programmer with it. Official Arduino boards with WiFi usually cost huge or not available everywhere.

What is the Difference Between NodeMCU (ESP32 Based) and Adafruit HUZZAH32?

Build quality of Adafruit HUZZAH32 is excellent, well tested, has wider documentation by Adafruit. Adafruit Feather itself separate a product family. NodeMCU (ESP32 Based) not really different than Adafruit HUZZAH32 except the practical fact – NodeMCU is completely open source. Adafruit’s board is not really fully open source. FireBeetle ESP32 is closest board and costs same. Among these things from Adafruit, SparkFun and NodeMCU, who built the first one is not known. Lady Ada has surprising capabillity to reinvent the wheel (that is great to follow from money making point but disturbing as maker). Here is info around ESP32 :

Adafruit really just another reseller of ESP32 – not the OEM. Technically a well built NodeMCU (ESP32 Based) will have little difference with Adafruit HUZZAH32 at basic operations. Adafruit mostly did cosmetic changes. More precisely, NodeMCU with ESP-WROOM-32 chipsets are closest to Adafruit HUZZAH32. There are three different NodeMCU brands suc as Amica, LoLin, DOIT. You’ll be lucky to find “original”. It seems cloning is “legal” in China!

ESP-WROOM-32 chipsets has two models : ESP32_Demo Board_V2 and ESP32-DevKitC. Later known as version 1 and former version 2. Ofcourse version is better than version 1 but it is luck to get version 2.

Adafruit HUZZAH32 has a LiPo battery port. FireBeetle ESP32, DF Robot’s ESP32 boards also has such ports. Other boards usually lack the port. It will not matter much.

How to Get Started With NodeMCU (ESP32 Based) With Arduino IDE? 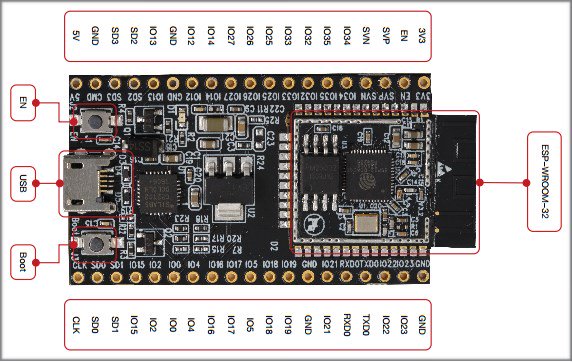 I guess you are buying ESP WROOM 32. ESP-WROOM-32 will be printed over WiFi module. ESP32 FireBeetle board is model ESP WROOM 32 board. You’ll use ESP WROOM 32 just like using any other Arduino compatable board. You’ll get some hard worked guides on basic setup with Arduino IDE :

You may have to press the boot button while Arduino IDE uploads the code. It depends on the board. Of course you can add LiPo battery port, charging board, LiPo battery to your generic ESP WROOM 32.