Previously we discussed basics around MicroPython and also configured to run MicroPython via IDE. Here is ESP32 MicroPython Setup with Adafruit Ampy for Windows, MacOS X and Linux. You need Python needs to be running and install few tools. An important note for this guide is to use the default command line tool for installation of Python packages such as Command Prompt for Microsoft Windows (do not use Ubuntu Bash on Windows 10 for this guide). Command Prompt will accept almost same format commands like that of *nix system. On Windows system, it is not easy to access the COM ports via Ubuntu Bash as /dev/ttyS. Command Prompt supports many *nix tools such as GNU Nano, grep etc. Essentially you’ll not feel huge problem with Windows Command Prompt. Use the default Terminal app for MacOS X. Mac may need to append sudo before pip commands. GNU Linux are most flexible and no special instruction required.

Attach your ESP32 with the computer. Open device manager or Arduino IDE to note the port. As for Windows, it will be some COM, like COM6. In *nix convention, serial devices will be at /dev/ttyS like /dev/ttyS6.

First ensure that Python 3 and pip installed and updated. Go to this webpage and download the firmware :

Do not read guides of that webpage. First install the ESPTool : 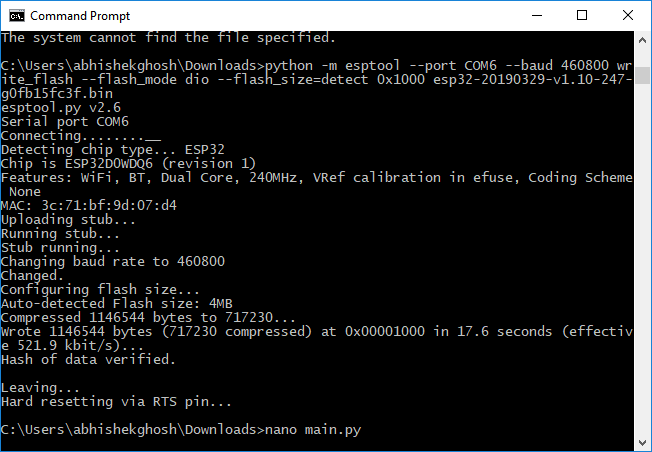 It is a Python script to blink the on-board LED of ESP32 :

You can upload code in this way :

I guess this guide ended here !