Robobees is a robot. But the robot mimics a bee – both in size and on Intelligence. The project involves designers, craftsmen by Harvard apart from Engineers. Robobees looks like Crickets, a family member of Grasshopper.

Robobees falls among the Micro Air Vehicles. It is one of the mentionable work in the world of miniature with compact design empowered by high-energy power sources, running on ultra-low-power computing and sporting electronic sensors; and artificial programmatic algorithms to manage multiple, independent units. This class is also known as robotic insects with artificial intelligence.

We talked about Ant Colony Optimization and Artificial Intelligence, Collective Intelligence and this is a kind of such practical example. 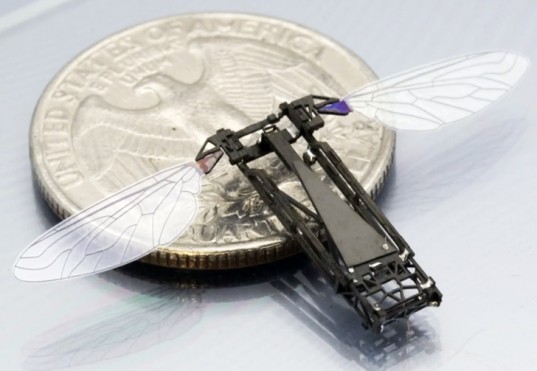 Autonomously pollinating a field of crops is an example, these kind of toy like tools can offer many things like – search and rescue after a natural disaster, military surveillance, Geographical mapping etc.

Brain : Read smart sensors, like the eyes and antennae of the natural friend.

Colony : Already scientifically explained by us, how these artificial algorithm works.