Advertisement
You are here: Home » Heroku or OpenShift or AppFog for WordPress?
Advertisement

Heroku or OpenShift or AppFog for WordPress – Which is better, suitable and most easy Free PaaS hosting option for an average user ? Let us go through the topic. Actually these point is very frequently asked by any level of user – Heroku or OpenShift or AppFog as PaaS. We practically wrote such broad articles before – Which PaaS is Better Option kind of comparing these three, even we pushed to a bit danger point writing about the advantages of Heroku Over OpenShift Cloud PaaS. Heroku is not easy to use, it is easy to roll own things, AppFog has a different flavor and OpenShift is clearly easy to use.

Heroku or OpenShift or AppFog for WordPress : Points to Consider

WordPress has typical advantages and issues. Sometimes on usual age old Apache Server, it is practical fact that WordPres, specially an older websites create some issues which needs both GUI based access to database (like via PHPMyAdmin) or FTP access. It is abnormal to think that no issue will ever appear – unless you never install a single plugin plus never update. Although that ‘never update’ strategy can end up by getting hacked. No serious blogger exists who ever had no issue with WordPress. PaaS has limitations. This is a biggest point for writing this specific guide – Heroku or OpenShift or AppFog for WordPress. This is exclusively for WordPress, not Rails, node.js or even other PHP-MySQL based App.

Heroku or OpenShift or AppFog for WordPress

Openshift is great, Free PaaS and actually allows real 5 minute installation. We have a long guide on Installing WordPress on Free OpenShift PaaS . We actually have the guide for all of these three PaaS. So practically with both OpenShift and Heroku (you must look at Heroku Advanced Commands and Heroku Addons). Heroku file system is emphemeral. It is possible to get PHPMyAdmin on both Heroku and OpenShift. Heroku clearly has the other advantages with the third party apps, but configuring Heroku demands good knowledge of UNIX commands, Git etceteras. It is not impossible to have SFTP access to Heroku App, but practically the usage is limited. 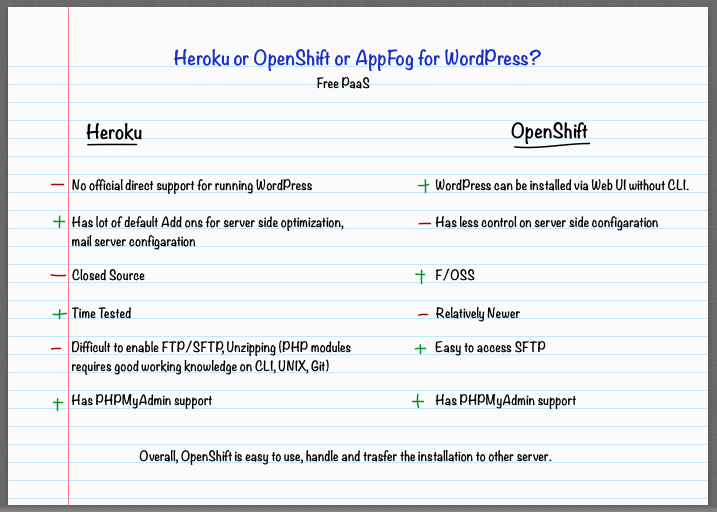 Clearly OpenShift has easier way to access SFTP (via SSH and and SFTP client, you will get on to /var/lib/openshift/user/app-root/data folder). Both Heroku and OpenShift has some specific advantages and disadvantages, but probably OpenShift is better option for the long run. AppFog is not compared, because its difficult to find high level modification guides by third party websites/blogs than both of these two. Obviously, its a fact that, with OpenShift, one can install the Plugins, Themes in easy way; just like a traditional server or IaaS. You have to configure Heroku to enable these features. Support of OpenShift is possibly better.

Feedbacks as longterm users will be appreciated from the readers as practically we do not use any of them for long run, our idea is from test environments only.

Articles Related to Heroku or OpenShift or AppFog for WordPress?