A basic theory about the higher end Macs like MacPro, MacBook Pro etceteras is nothing but to consider it as your attention grabbing girlfriend. Apple uses the highest possible materials, now some glues are also used, but they are far better glue than HP uses. Some amusement before going through it.

HP-Compaq uses cellotape inside. At least my one had such! One person in Google person supported hugely the usage of Cellotape inside a Laptop. Honestly, how funny human nature can be – is it acceptable to have a cellotape inside a $500 Laptop ? If it was DIY project of $200, then it was great. Plus, when you are buying something, there are lot of Laws to protect the consumer for such fraud cheaper solution. One Enterprise grade manufacturer must pass some set standards to sell something with lot of badges, Taxes. Cellotape unfortunately do not fall in that category to be used in most of the contries. But, practically its difficult to prove that HP used the Cellotape (all Laptop manufacturers usually uses cellotape with no branding, teared like as if a moron has teared the end, there are reasons behind, keep reading on) it was not added by you for harming their ‘clean’ corporate identity. This is why the cellotapes are usually unbranded, added like as a DIY method. At anytime, they can claim the warranty is void if, they understands you have opened it somehow. The cellotape is acting as fixing bridge both for legal and computer hardware. Our Advocate gave this excellent explanation. Usage of Industry’s standard Gum is legal. You will never find a cellotape inside cell phones, there are other ways of fixing. You might be clever, intelligent; but a company has a collaborative business intelligence. Actually Cellotape is more costly than using their own ribbons – the cost of glue allover the surface, which is not needed will be deducted for bulk order. This is how money is made and kept safe.

In case of Non-Retina MacBook Pro, there is Superdrive. In case of Retina, there is no Superdrive. iMac has Superdrive but the quality inside may be not of expected level. That is why I started this writing mentioning “higher end Macs” – Quality Control by Third Party OEM differs by pricing. The orders are placed in that way. Its difficult to say that you’ll be very happy after opening iMac yourself ! But, MacBook Pro and Mac Pro at least has something inside, although glue is increasing day by day. That also explains the different cost Apple Care coverage. It is a fools work not to be covered. 3 Year is practically the maximum durability of the hardware manufactured now by the Third Party OEM suppliers with extensive usage. One free replacement is more than enough to get back the money. When you’ll reach near 3 years, vigorously check what is not working – immediately complain for any issue. You need to be clever in this World of Ripping Trade. What I want to say, if your MacBook Pro is under the cover of Apple Care Protection Plan, find more issues and complain. Apart from probable Superdrive only replacement, you might get the whole MBP’s inside fully cleaned. If you complain “Fans are creating harsh sound at full speed”, they will clean the Fans. You were probably thinking to do a request !

Mostly this issue of Ejecting CD/DVD Discs happens for dust accumulation or Hardware Failure. Hardware Failure due to improper function of Laser reading system is rather rare and not possible to detect. Slots are like…I mean change the letter to understand the meaning. Slot loading Optical Drives are worse, indeed all Laptop Optical drives are universally bad, sometimes it is an issue of Firmware. Windows PC laptops has a issue with Hitachi manufactured Optical Drives. The reason to write so much is for the reason – we never understand that our money is being ripped off by the others. I might rip you at one point, you might rip me at another point. The story is dusty – survival of the fittest. So, get a replacement if your MBP has replacement. You need not to read it.

It is dust that accumulates over the Lens of the drive. It is a small Lens, mounted on a very fragile arm like thing with a Servo motor controlling the movement. There is another motor which spins the disc. Its facing towards the reading surface – so its looking upwards – towards your God, whatever the name is. But Newton said – Apple will always fall to ground ! So, dust falls on Apple’s Lens with time. Apple tries to hide it in two ways :

Apple definitely knows the Gravity part and interaction with dust. But who is going to explain to an Employee that dear, our idea was basically wrong and against the Nature. Apple Do Not Understand Gravity itself is a big De-branding !

So, you will see that, people are saying – “I made my MBP upside down and it got fixed”. True! Newton Pulled Apple’s Dust by Means of Gravity. But, not in all cases this will fix. So, if you have crossed the line of Warranty, then you might do these depending upon your skill, it is obvious that if you want to fix your girlfriend’s broken rib like me, you will end up with a manslaughter ! 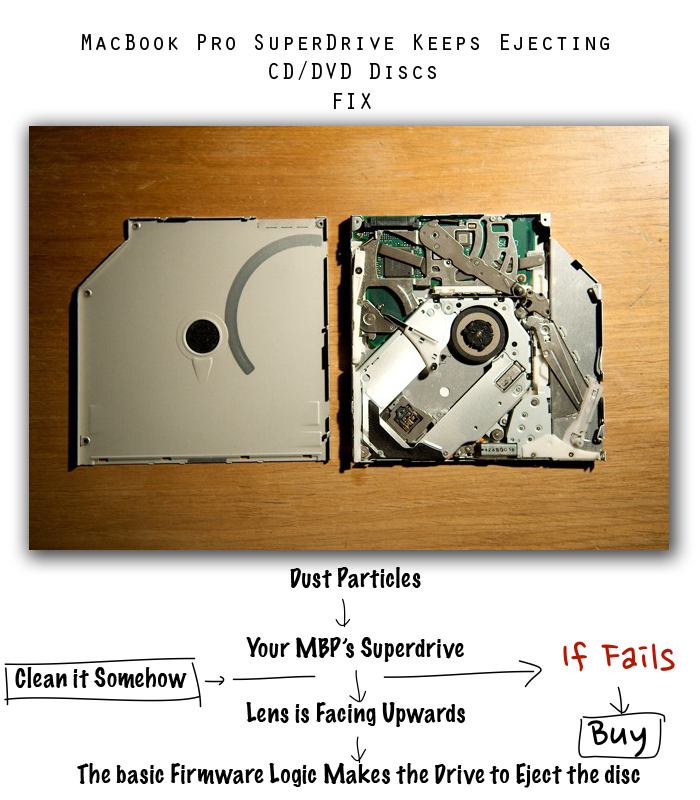 Some points will save your time :