CocoaPods is a dependency management tool, here is how you can install and use CocoaPods for your next iOS App from iOS prototype App made by the others. We think, if you are a beginner in iOS App development arena; you better start reading our old guide – iOS Universal Framework XCode Project Template and How To Start Developing iOS Apps. We separately explained the RESTful API creation part and also mentioned about a RESTful API Testing Tool named CocoaRestClient.

The newest phrase popped up here is Dependency Management Tool. We should briefly explain it first.

CocoaPods : What is a Dependency Management Tool ?

Official webpage of CocoaPods is here :

This guide – Fixing UNIX Commands After OSX 10.8 Update will give you the all stuffs needed for a proper setup. The article is a misnomer, works for OS X Mavericks and also describe installation of Homebrew Package Manager and iTerm2. Although installation of Homebrew Package Manager and iTerm2 are not mandatory for our usage, we like to use them for easy management of repositories and CLI tools.

CocoaPods runs on Ruby, so we need nothing more to install except CocoaPods itself.

There will be no initial response in the command line output, as if nothing is happening; but it will ultimately get installed, after a brief time of waiting you will see the output. Also, if you are a nervious type person, simply quit iTerm and use this command instead to view what is happening : 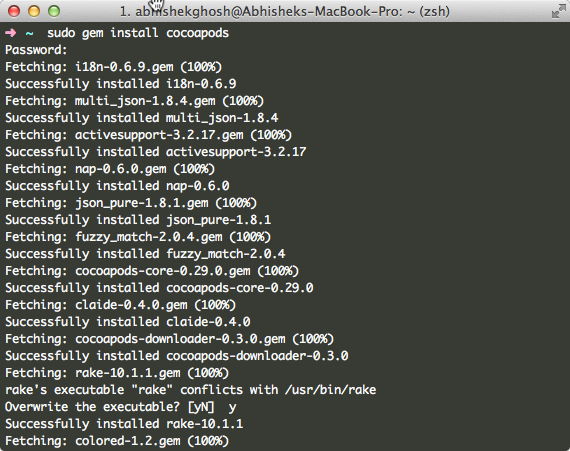 The command will install 16 gems. It might ask whether to overwrite rake with option y and n. Press y and hit Return key. Next command will be :

It might take time and throw errors. Possibly the reader is aware that gem is the package manager written in Ruby. And probably the best version manager for Ruby is RVM :

But before going to run the pod setup command, we will suggest to run :

and fix the errors first. Again, pod setup command can take a huge time without any practical output of what is happening. Next you must follow guide of this repo :

The Core gem provides support for working with the files that are involved with CocoaPods, mainly the Podfile and podspecs. A Podspec or Spec, describes a version of a Pod library. One Pod might have many Specs. It includes details about where the source should be fetched from, what files to use, the build settings to apply and other general metadata such as its name, version, and description. The Podfile is the file that defines the pods you want to use.

Start up Xcode and create a new project with the iOSApplicationSingle View Application template. Name the project CocoaPods and make sure to enable ARC (Automatic Reference Counting) for the project. An example iOS App to start with :

This Article Has Been Shared 485 Times!