chroot means ch is root. ch is Child (child process). chroot was introduced in 1979. Here are examples of chroot Command through examples. The reader should know the basics of UNIX, Linux, Unix Shell or Shell, UNIX Wheel Group etc. topics. chroot stands for “ch is root” as said before and is a function under *nix systems to the root directory. It affects only the current process and its child processes. Chroot itself can refer to the system call related to chroot as well as the utility named chroot.

A program that is “rooted” in a directory and has no open file descriptors in the area outside the virtual root directory, can (with correct implementation of the operating system kernel) no longer access files outside this directory. Chroot thus offers an easy way to untrusted, test or otherwise hazardous programs inside a sandbox. It is a simple Jail mechanism, but from quite easily be broken again.

chroot was not designed as a safety feature, but primarily used for setting up virtual environments. The first known use was greater in Network Software Engineering (NSE) on SunOS in 1986, where a departure from the surroundings was fchroot(1) possible and documented.

In practice, “chrooting” is difficult because programs expect at launch, space for temporary files, configuration files, device files and program libraries to be found at certain fixed locations. To run these programs inside the chroot directory, the directory containing these files needed to be equipped.

Under Linux chroot is not designated as a safety feature. Manual is in the chroot(2) man page documents. Many BSD systems, however, runs a process that needs a chroot environment. FreeBSD provides the concept of jails to foreclose processes from each other. On OS X, you will get manual of chroot by running simple command like GNU Linux – man chroot. There is no /root visible under OS X when used in normal way. 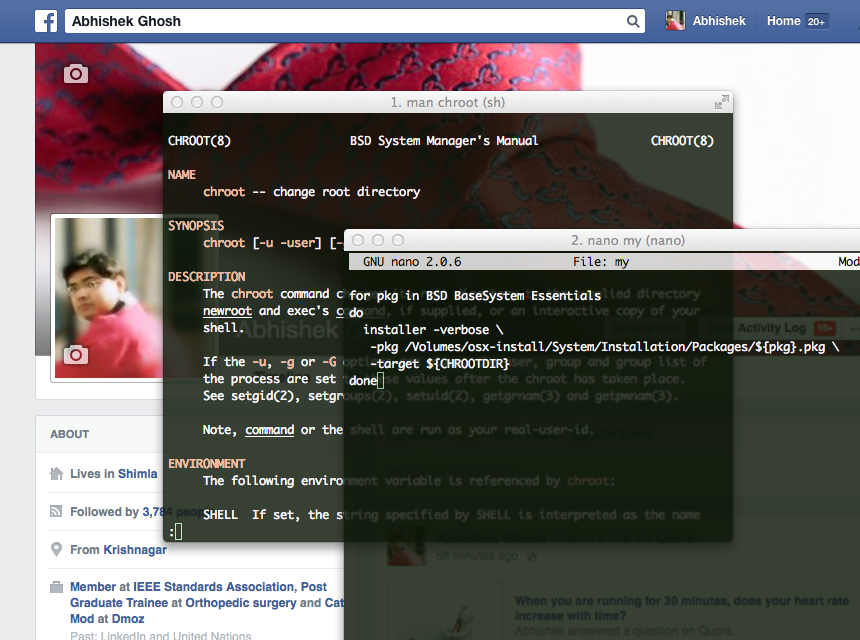 chroot Command Examples : When We Use

OpenVZ is a virtualization solution that works similar to chroot concept. Since most Unix systems are not completely file system-oriented, potentially dangerous functions such as the control over network and processes can take place through system calls to a chromed program. We use chroot for :

Method to chroot (from any live session) to #! on disk via SSH for recovery (done when #! is installed on /dev/sda1 but is not accessible via grub on deb based system) :

This is all as basic about chroot!