Advertisement
You are here: Home » Basic Electronic Components List and What They Do
Advertisement

Here is an Illustration of the Basic Electronic Components List and What They Do. This article is helpful for new Electronics Enthusiasts. Before we begin, we would suggest you to consider reading some of our old articles which we are listing below. Most commonly, people searches for making a buying decision or after buying a package from somewhere, try to identify them. Packages are most commonly great but also bloated with lot of useless stuffs. We have nothing to sell. We suggest to find such a package, usually shipped from Amazon sellers in a box and small packets. But you can talk with the seller to exclude some and decrease the price a bit on request. As they have not opened a charity, they will tend to push stuffs which you probably never need.

Shops, be it online or real life store, tend to sell such package at lesser price as clearance. Some of these components may die with time. Always ask the seller, whether the individual component packet bears a label and if some important parts does not work after initial test, whether they’ll replace. Without labels, cost might be lower. Without testing by them, it will cost lower. You will get most good packages at $10 to $20. More costly packages are usually not needed. Those packages tend to include display and other stuffs which we can separately buy at lesser cost.

A basic digital Multimeter does not cost a huge. Without a multimeter, you can test the stuffs after a purchase. You possibly know what is a breadboard. Also read about breadboard power supply – you do not need to create a circuit for the power supply part. The breadboard – power supply written there works with only a type of breadboard.

With the introduction of Arduino and Raspberry Pi, the packages got a bit costly than they were before. When we were kids, they were quite costly. Do a market research before buying the “kits”. There are situations which you will face later, like how to measure the resistance of a resister. It is good to have a magnifying lens.

Practically you can buy the components as individual package at lesser cost.

Resister we mentioned here are the most common resisters you will see. Resister resists electricity. You need a set of resisters from very low resistance to higher resistance. Buying resisters separately later has no problem as resister usually do not die.

Since my age of 5-6 years I rarely saw dead resistor from supply.

Electrolytic capacitors are worser than you can imagine. Always keep them separately, handle and store in a dry place. You should read about Capacitors from Wikipedia to only see how many different looking Capacitors are available. If you are buying a kit, their look can confuse you.

I loved to suck the smaller ones, that created the dampness, damp made them to burst, burst made “tasty”, tasty made to feel “geeky”. I understood the mechanism after a decade.

Actually if you want to become solid in basics, play with a vacuum diode. We all probably read about vacuum diode in schools as a part of physics. What the diodes we will use and buy are semiconductor diodes. You should read about the diodes from Wikipedia to avoid visual confusion with many different looking diodes.Diode is a device that lets current flow in only one direction.

Transistor is ta fundamental building block of electronic devices. If you ever get chance, test a vacuum transistor. Transistors amplify current and signals. Again, read Wikipedia. If we write an article on them here, the main goal of this article will become boring.

Trim pot is a small potentiometer, usually for used for internal adjustments. Your kit will have some.

These are variable resistors in very short. A standard kit sold for the beginners will have the stuff.

Light Emitting Diodes usually comes in rainbow color. They are practically used now for a ordinary bulb too. Bulb required holder and got blown. Bulbs are costly.

Invariably, you’ll have some Integrated Circuits in the kit. They will bear some number.

It is a very small switch and usually included in a kit. Finally an infographics or sort of infographics, illustrating the fact – you need not to know so much at the beginning : 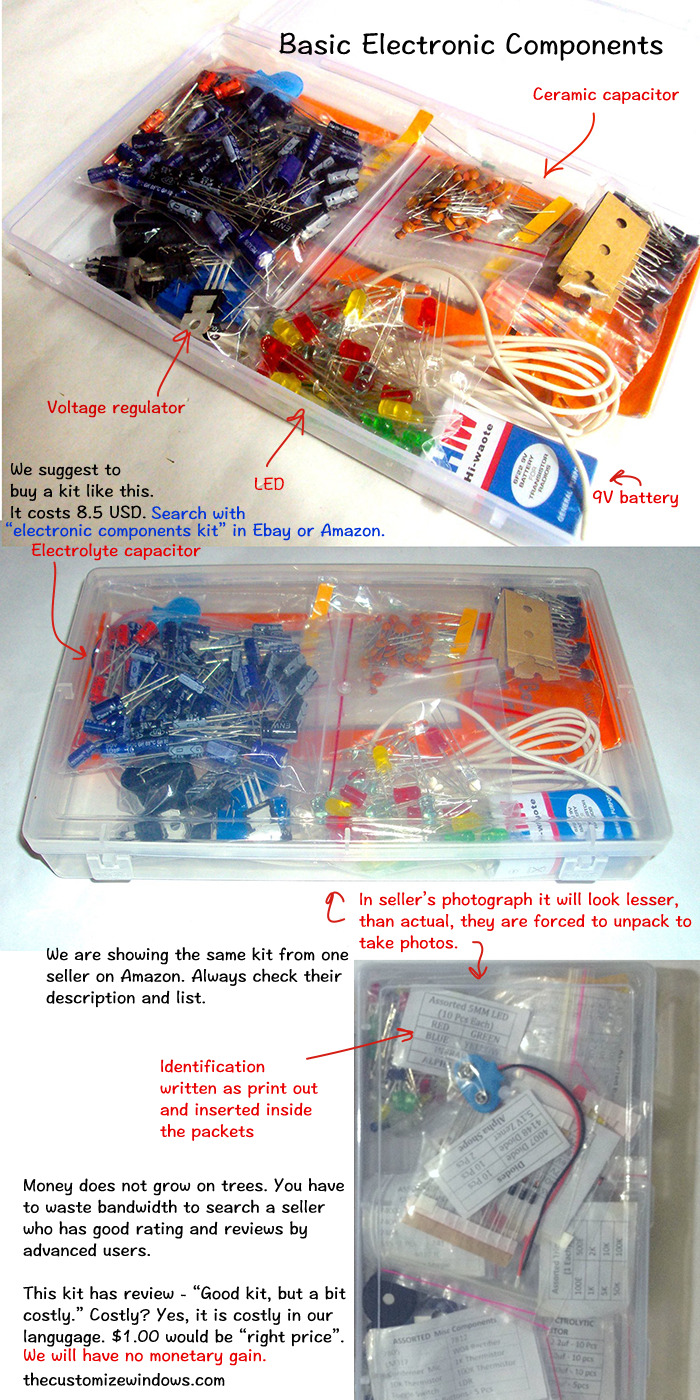 If you follow our way of purchasing the things, practically you’ll not face any issue in future. You need no micro pump in a kit, you need no sensor in a kit. You will buy them later after knowing what exact thing you’ll need.

This Article Has Been Shared 591 Times!

Articles Related to Basic Electronic Components List and What They Do