Advertisement
You are here: Home » How to Install Powerline Fonts, Symbols for Bash on Windows 10
Advertisement

In our previous guide on Bash, ZSH, Hyper Terminal on Windows 10 setup we we almost closer to Mac’s iTerm. The next guide was on installing Python from that bash in unix style. Installing Powerline Fonts on Windows 10 Needed To Show Glyphs Properly. Here is How to Install Powerline Fonts, Symbols for Bash on Windows 10. This part often improperly written in most guides. It is very difficult unless both UNIX and Windows system is known. I am no way master of both system but this guide will definitely help you.

This guide will help to get rid off troubles like odd [] like glyphs on either Ubuntu Bash or Hyper Terminal. What is this Powerline? You better look at our old guide on how to install Powerline on Mac. It was basically a ZSH (Oh-My-ZSH) for iTerm2 like beautiful Terminal of Mac. Slowly the thing became for GNU/Linux, Windows 10 computers as all now have unix like part. It is for decoration purpose. As because most of the Windows 10 portable computers has pathetic display, the end result of color output is not exactly like Mac or having a great 4K display. This is what you’ll get end of this tutorial : 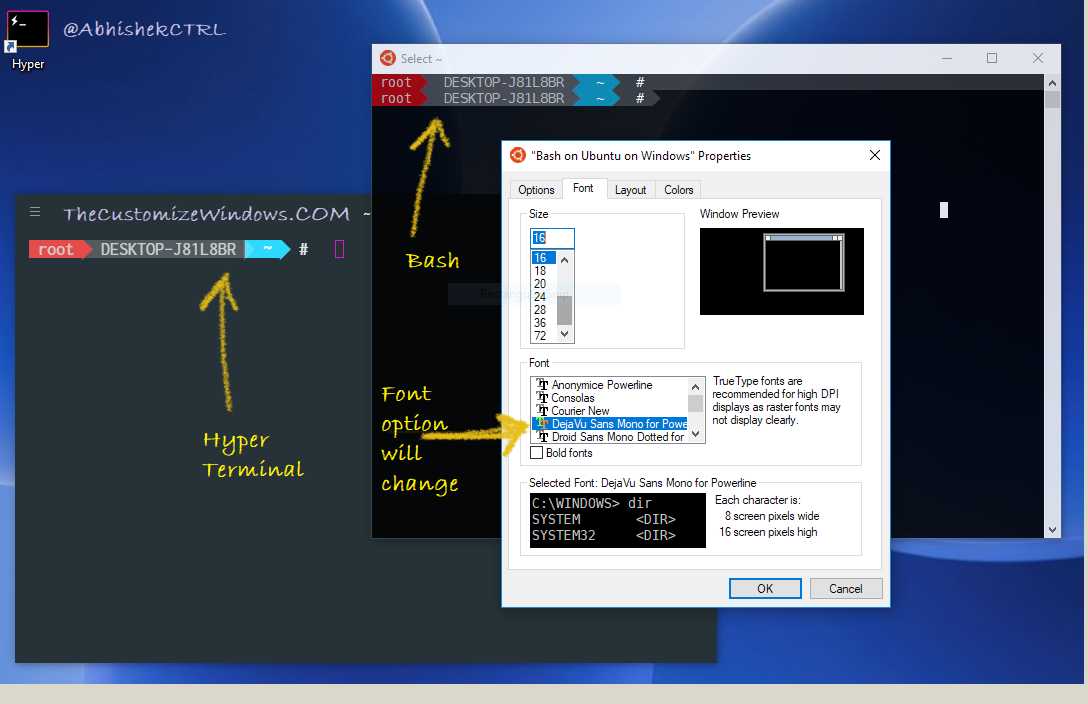 How to Install Powerline Fonts, Symbols for Bash on Windows 10

You need Python, pip to have installed on the system. Our old guide on installing Python from that bash in unix style is correct step. I am going to the details of Font installation part on Windows 10 environment as second part as many readers basically can not configure the setup to use so powerful font.

Next we need to run some commands to install few things :

Then you need to install this Powrline shell like Linux :

Run these commands to install the latest build (instead, you can use pip as written in their document) :

Add the following to your .bashrc :

Add the following to your .zshrc:

Although we installed Powerline Font via aptitude above, we actually need to follow the git clone way :

Now the fun is that, you need to open Windows Explorer to go to that fonts directory (although technically you can git clone somewhere else to do these steps, it gave me huge fun). Copy-paste the location on Windows Explorer and hit Enter :

Right click on that Install Windows PowerShell Script and run it. It will peculiarly get installed evoking lot of Windows. It is basically for filling the gap in between Linux and Windows.

Now, on Bash windows, right-click to get Properties menu and go to Fonts settings. Select some font like DejaVu Sans Mono for Powerline with Font size around 16.

Now, open Hyper Terminal, go to Edit > Preferences. Change the font, font size there too, like this an example :

// default font size in pixels for all tabs
fontSize: 18,

// font family with optional fallbacks
fontFamily: ‘Inconsolata for Powerline’, font there too :

Open ~/.zshrc and change/add these :

The above POWERLEVEL9K_RIGHT_PROMPT_ELEMENTS=( ) is my own choice. You can look at official guide, which will be :

Re-launch the applications, you should get setup like mine.

This Article Has Been Shared 632 Times!

Articles Related to How to Install Powerline Fonts, Symbols for Bash on Windows 10