The reason behind so huge discount is for the reason – the model has a mechanical hard disk with Intel Optane module and 8th generation i7. So for me, with the tag of $850, it is a good bargain. You’ll get HP Pavilion x360 with i5 without NVIDIA graphics card.

So What This Review Will Offer Me?

HP Pavilion X360 14-CD0055TX was a good model to gain the market at that time. Almost all of the online reviews gave it 4/5 to 5/5 rating. You will not get anything from HP now within $1000 closer to my model’s specification. I am a gainer because it was an outdated model. Many of the buyers with a budget of $1000 will tend to purchase an HP Spectre x360. I can make you aware not to buy anything latest from HP below HP Spectre x360 with 4K display. HP x360 have a pathetic history of overheating issue. With $850 investment, it does not matter to me to use it as a secondary laptop for some illustration, checking web design in landscape orientation. It shares the common problems of HP as well as the good things peoples love to have from HP. I purchased after knowing the shortcomings.

The present strategy of HP is to offer entry grade models as HP Pavilion X360 and usable models as HP Spectre X360. They are for lighter works.

The model under discussion was during the transition from Intel Kaby Lake to Intel Coffee Lake southbridge. The model performs excellent with 1-2 applications. The simple reason for overheating is obvious – all of us want a mobile, sleek version of a powerful computer on our lap! It is normal for an i7 to struggle in so sleek place. There is a lot of discussions around the topic on overheating :

The ideal environment to run this computer is inside an air-conditioned room with an external power supply. HP realized the issues and switched up to i5 for Pavilion and Envy series. You’ll get the overheating issue with HP Spectre 360. Regular overheating can kill a laptop too fast. So avoid overheating.

The design is excellent, looks like a sibling of my MacBook Pro. The bottom part is nicely inspired by Apple. Usually, the back of the PC laptops is not ideal to show anyone.

157 PPI with a pitch of 0.161 x 0.161 mm can be considered Retina. You’ll not understand any difference with Samsung A50s to Samsung S10. The display either from Samsung or LG. The maximum brightness is near 500 nits and colour gamut is near 65% of the sRGB. You’ll hardly need 200 nits to read under a bright light. The display is possibly optimized for work with a pen with a paper-like feel.

You’ll feel a lack of punch of blue, green and red. It somehow filters the blue, red, green spectrum on the built-in display. You’ll feel as if a grey overlay is present over the display. It immediately recognizes a 4K television as an external monitor and outputs the exact colours. These facts will not sound great to the designers.

Here is info about the NVIDIA graphics card :

There are plenty of ports including a USB type C port, an HDMI port, 3.5 mm port, and two USB ports.

The keyboard is enough good for typing lesser. It has a backlight without any control of intensity. The caps lock and mute buttons also sport LED indicators.

The touch screen and pen

The pen and touchscreen combination is enough good to use Adobe Photoshop or some of the Apps for Convertible Laptop With Pen. But you have to place the laptop somewhere like on a bed, or a carpet (you can not keep on a hardtop table thinking of the keyboard).

Sadly, the battery is not very impressive, as it is rated at 41Wh.

An 1 MP web-camera in 2020 is a joke. The fingerprint sensor will be at your left hand side. It is tricky to get a correct scan in one shot. The 65W power brick looks great, although still ugly compared to Apple’s MagSafe. The packaging is funny in front of Apple products – it is just a cardboard box. 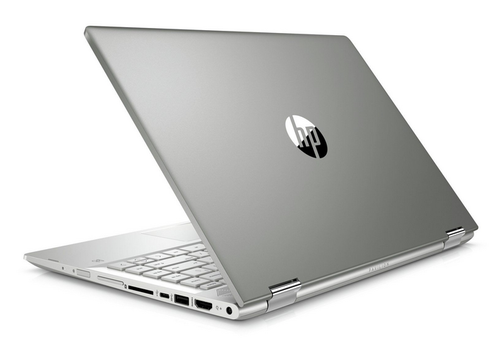 The product is like that from Apple – great design denying physics. Heavy usage will create overheating and slow death of the motherboard. Another bad news is less frequent update of the drivers from HP. I talked about Missing B&O Audio App in HP x360, the worse happens with HP 3D DriveGaurd. The original design of software was to turn the HDD LED to red (indicating lock) while changing the direction of the laptop. The current driver has not even delivering an app with an UI. You’ll find lot of complains on HP forums.

At $850 getting an i7 8th generation laptop with 4GB NVIDIA GeForce MX130 graphics card a good bargain. Cost of the 2-in-1 laptops hugely increased because of sudden craze. I can not complain because I paid just $850. Recent models of HP Pavilion x360 have far inferior displays. Whether you’ll purchase an i7 or i9 laptop with pen investing $1500 or more is a thing you should carefully think.

This Article Has Been Shared 877 Times!