Advertisement
You are here: Home » Aakash Tablet is a Worse Offering Than Tata Nano
Advertisement

Everything has a base price to sell. After selling there Gross Profit accumulates. Net Profit is always less than Gross Profit as to manufacturer the thing some extra effort those has to be purchased. There are many mistakes present in beloved Aakash Tablet which will bring its failure. Tata Nano is among Tata Group’s very very few failures. But Tata Nano was a far better offering than Aakash Tablet.

Why Aakash Tablet is compared with a car – Tata Nano

Because both Tata Nano, a car and Aakash Tablet, an Andoid device had the target to make their future customer assure that they will get a good product, which class of products were out of their budget to purchase. Both are basically thought from India.

Tata Nano might be a failure from the aspect – what people expected or they expected as ROI has not been achieved. Maruti Suzuki Basic Cars are very closer to the price bracket of Tata Nano with Maruti’s Country wide support.

Apparently, it is Reliance’s Dhirubhai Amabani Pioneer offer, which was a revolutionary idea and brought mobile phone’s call cost and Text Messages to nearly 1/10th powered the idea of both Tata Nano and Aakash Tablet – give stuff at lower price, it will sell like hot cakes.

DAPO was a success because it delivered quality content at right price. Still, Tata Nano as a car, is far better than our Aakash Tablet at least from the point of quality.

If Aakash Tablet like cheaper thing was possible to offer, Reliance would offer Reliance 3G Tab at that price. Aakash Tablet is just like a crap Cheap Chinese Tablet, nothing else.

Why Aakash Tablet will fail 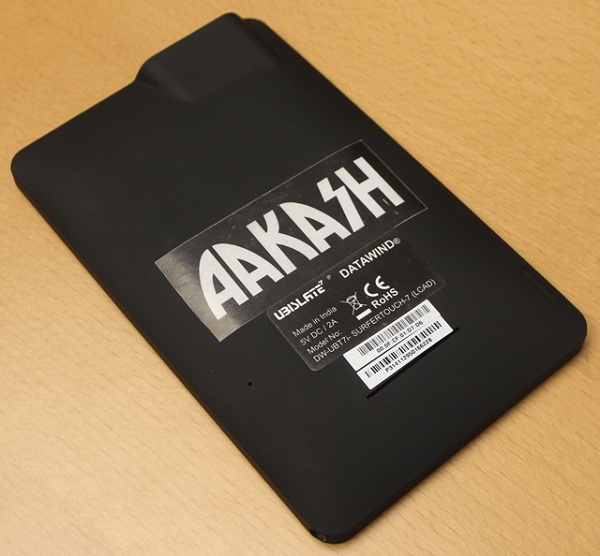 This is the rear of Aakash Tablet, users will not love the stickers for sure.  Photo Courtesy : Venture Beat

Practically, an user of Aakash Tablet will unable to use any Apps listed on our Android section. The best substitute for Aakash Tablet might be Relience 3G Tab for the Indians. Those who can not move their budget upwards or rather finding something like Aakash Tablet at that price bracket – go for branded Cheap Chinese Android Tablets.

This Article Has Been Shared 831 Times!