Ambient Intelligence is pushing the technology towards the limit it had at the end of the twentieth century. It has direct relationship with Internet of Things (IoT). This concept seems to take the place of non-literal translation of concepts born in North America under the initial term like ubiquitous computing and pervasive systems. In this approach, the concept of information system leaned towards processing of the activities exclusively focused on the user, the computer becomes an interface between communicating objects and people.

Technological change allows the manufacture of the computers to build tiny computer components, sensors and sensors that can be ubiquitous ( nano-computer ) and communicate with each other and over different networking protocols. It opens up the opportunity with almost all objects of daily life, the ability to trigger a spontaneous exchange of information, without interaction with its user. Computer concepts evolves into complex networked systems, fundamentally different computer systems than twentieth century.

These new concepts may induce profound changes in the social, cultural and business concepts and getting into daily life. Many forecasters believe that the inevitable change in lifestyle is underway.

The Internet has dedicated the advent of conventional global networks, but the next mutation appears to promote the development of ambient intelligence by pervasive computing, which already is brewing over different terrains. 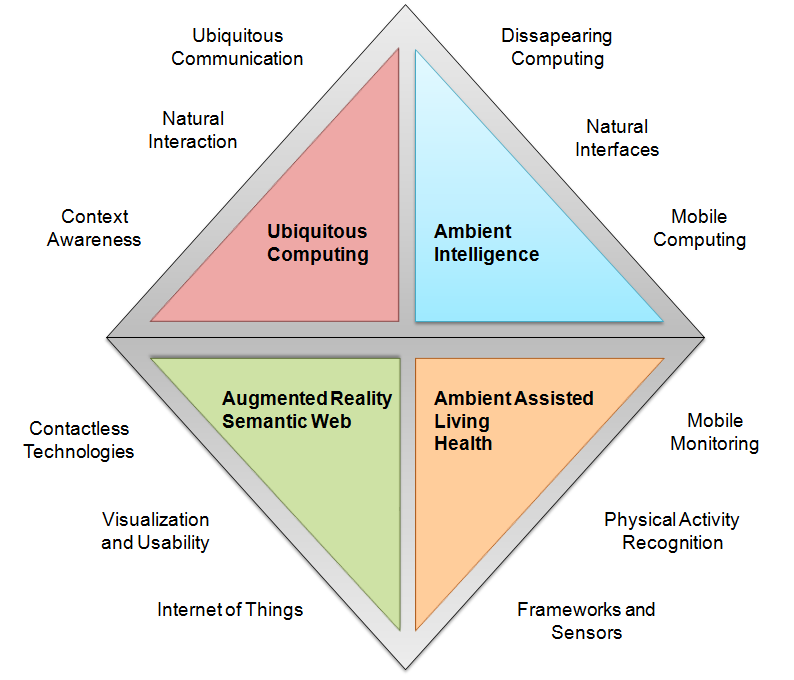 The Basic Components of Ambient Intelligence

Ambient intelligence implements some basic elements. The ubiquity is the ability for the user to interact (actively or passively), anywhere, with a multitude of interconnected sensors, activators, and more generally with electronics embedded devices around the person. All through modulating networks and a highly distributed computing architecture.
The ability of the system to constantly feel the presence and location of objects, equipment and peoples to take into account the context of use is called watchfulness. All kinds of sensors are available for this purpose – cameras, microphones, biometric sensors etc. The natural interaction natural is the access to services which must be the most natural / intuitive as possible.

Unlike the traditional interface of the computer world, the human-machine interface is multimodal. It revolves around speech recognition, gesture recognition and manipulation of real objects. The intelligence is the ability to analyze the context and dynamically adapt to the situations. The system must learn based on users’ behavior in order to meet their need. This involves the capacity of information storage, processing and algorithms for modeling and a so-called approach known as artificial intelligence.

This is a short article on Ambient Intelligence, because this is titled as the Basics.