We are not breaking anything in this DIY work. Suddenly I found that I purchased a JXD 661 Media Play near a decade ago. At that time, it was quite decent at that price. Nokia N73 Music Edition replaced that stuff. I found that, it is basically easy to use it as display of Arduino. We talked about Arduino displays before and also how to use mobile phone’s display as Arduino’s display. We Can Use Decent Quality Made in China Media Player Like JXD With TV Input as Arduino Display Without Buying Anything. Code & Lib Included. If you really have one such media player or may be, if you found a cheap stuff, it is not exactly bad. We are actually against making AdaFruit’s lady richer!

This is a recovered post/article/guide after disaster. Contact us if you find any odd thing!

Media Player With TV Input as Arduino Display : What My JXD 661 Has Extra Things

JXD 661 has RCA jack for TV input. Read about connectors later. RCA are those Red & White male connectors for Audio and Yellow colored connector for Video input. JXD is a standard company. You can probably buy their new models. I am huge fan of good quality Made in China stuffs now.

Media Player With TV Input as Arduino Display : Wires and Resistors Are Only Stuffs You Need

For this project, to make such Media Player with TV input as Arduino display, you will need :

Insert the male connector to the JXD like Media Player’s input. Obviously, Red & White male connectors for Audio – we need to use the. We need that Yellow colored connector for Video input. That is why we need any conductive wires – copper, tin, aluminum, gold. Wrap the outside of the yellow RCA with one wire and cut one end. Wrap another wire to the middle pole of the Yellow RCA jack. Do not short circuit. In other words – cheapest, easiest way to connect.

That wire from outside is Ground or Negative. It will go to Arduino’s GND. It is better to plug that wire’s end to a breadboard and use a jumper to connect from that breadboard to Arduino’s board. Everything has a minimum decency!

Now, 2 jumpers from Arduino’s digital pin number 7 and 9 will go to the breadboard. We tested the Pin numbers, many are saying that number 8 works not number 7, but for us – 7 and 9 worked. 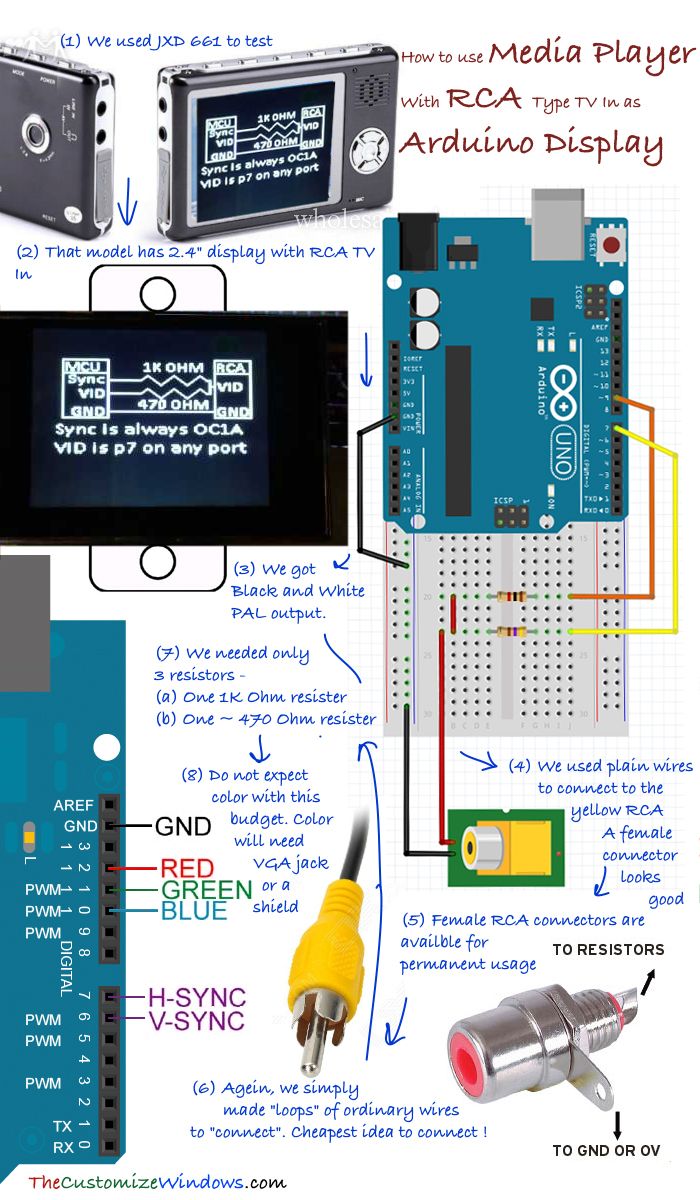 Original code is here (you’ll not use it, but use read the documentation) :

You’ll see that there are four directories :

…and drop those TVout, fontsALL, pollserial, video_gen directories (not zip) and launch Arduino app, those libraries will get included. Officially, zip each of them separately, so that they become :

Then, here is written on Arduino’s website how to upload those Libraries :

This Article Has Been Shared 369 Times!