Advertisement
You are here: Home » How To Restart, Shutdown Mac Faster From CLI
Advertisement

How To Restart, Shutdown Mac Faster From CLI? Very Easy. From GUI We gracefully Restart, Shutdown Mac OS X 10.x as non-root user from GUI. Basically for running hundreds of daemons, which are installed by Apple as member of UNIX Wheel Group delays the force shutdown and Forced Restart. OS X is cocktail of FreeBSD and NetBSD, but even with 12GB RAM, we have to do lot of works to make Mac to Shutdown faster.

How To Restart, Shutdown Mac Faster From CLI : Careful !

Be careful, you must know at least about Terminal, Command Line, some commands of Unix Like OS. We must read the manual of each command by running man used in this guide. This is not an alternative way to GUI based restart, shutdown. These must be used judicially, keeping in mind – for forced restart, no active opened files will be saved.

How To Restart, Shutdown Mac Faster From CLI : Restart

Restart means reboot. You can run man reboot to read the manual of reboot. Just like our servers, we can run simple reboot command to reboot our Macs. But, as username is not logged on console with sudo privilege, we need to add sudo, so the final command is :

It will practically take no time to see the login screen. If you do not use sudo, you’ll face error : 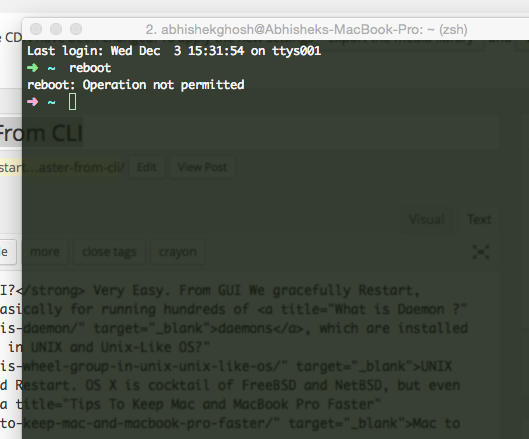 If you were having a session with sudo privilege, naturally, sudo need not to be added.

How To Restart, Shutdown Mac Faster From CLI : Shutdown

Shutdown is not easy. It is not sudo shutdown like above ! Basically, you have to recall 45 years old multi-user computers – you can kick the logged in users, broadcast message with timer. Running man shutdown will tell you lot of stories. Practically command to shutdown your Mac very fast from command line is :

Both are unix functions. Steve Jobs has zero contribution to these functions. You can write a bash script to make it faster, executing the sh will work. Basic thing to understand – the GUI part of Mac OS X Yosemite is too heavy and poorly integrated with unix system. You can actually recompile the OS and use with some other graphical environment, it is quite difficult, hence iTerm2, Homebrew are so much praised. If you try to recompile the OS, Apple applications will be difficult to run. That is said, but actually many HP-UX users use Homebrew!

This Article Has Been Shared 937 Times!

Articles Related to How To Restart, Shutdown Mac Faster From CLI