Advertisement
You are here: Home » Effects of Digitization on Companies : Part II
Advertisement

This article is continuation of part I.
Already in the previous centuries, different codes were used to deliver messages or to protect them from other people. An example is the Morse code, which has its origins in the 19th century. The principle behind the codes is always the same. New symbols or characters are defined for certain characters. In the past, this was always done in an analogue manner using light or sound signals. The sender passes a message to the encoder, which converts the message and forwards it via a channel. This channel can be done in different ways. Television broadcasts or letter mail are cited as examples. At the end of the channel, there must be a decoder that can decrypt the encoded message and convert it back into a form that the recipient can read. When transmitting the coded message, depending on the type of transmission, interference can also occur The idea of ​​coding is therefore not a new idea that has arisen in the age of digitization.

The forerunner of the modern computer is the most important invention on the way into the digital age. This early computer already had all the components that modern computers have, including input and output devices, an arithmetic unit, a storage unit and a program unit that reads the punched tape. In addition, the computer was the first to work with the binary system. This is based on the fact that there are only two states, the values ​​0 and 1. By extending the codes, any number of states can be created. The ASCII code is an example of a widespread code. ASCII stands for American Standard Code for Information Interchange and is defined by a 7-bit long code that enables a total of 128 states. A few years later from the first computer, John von Neumann presented his concept for a memory-programmed universal computer. The concept is based on the fact that the computer is composed of the following components:

Control unit (CU = Controlling Unit): The control unit calls up commands from the memory and determines the type of command.
Arithmetic unit (ALU = Arithmetic Logic Unit): The arithmetic unit then processes the commands in sequence. The arithmetic unit has arithmetic functions, such as addiction, as well as logical commands, such as NOT and AND.
Storage unit: The storage unit is used to store information and programs that the calculator can access.
Input and output unit: As the name suggests, the input and output unit controls the input of data, eg via mouse and keyboard, and the output of data, eg via a monitor.
Internal data paths (buses): The internal data paths, also called buses, link the individual components and enable their communication. von Neumann has divided these into three types: the data bus, the address bus and the system bus.

The principle of the von Neumann architecture was so revolutionary and ingenious that even today’s computers still consist of the above-mentioned components and mostly work in the same way. In the 50s and 60s, the development of computers continued to advance. In the beginning, the computers got bigger and bigger and limited themselves to the calculation of functions, especially in the scientific field, like for example nuclear research or astrology. The mainframes were extremely expensive and of no use to the private individual.

At the time, Gordon Moore’s article caused a stir about his observation and prognosis that the performance of microprocessors would grow exponentially through technical innovations and that processors could be produced more cheaply. Years later, the thesis was recorded under the term “Moore’s Law”. With the help of the newly developed microprocessor and computers with user interfaces, as well as connectable mouse and keyboard, there was a real boom on home computers in the 70s. Many people interested in technology, who only knew the mainframe systems in the companies, we’re now able to use computers at home.

For example, the first Apple computer came into being at the end of the 1970s. The final breakthrough for home computers came in the 80s. Many of them still have cult statuses, such as the Commodore C64 or the IBM personal computer. Companies have also discovered the potential of the workstation computer and increasingly converted it. Thanks to the graphical user interface with completely new ideas, such as the “recycle bin”, drag & The big breakthrough came with the drop principle and mouse operation. The advancing development of microprocessors and thus also more cost-effective production enabled rapid expansion. During the 1990s, a new breed of the personal computer became popular with the general public. The laptop, a portable desktop PC that is compact and therefore easy to transport, comes onto the market. It enables field staff to always have a PC with them when they visit customers, private individuals can easily take their PC with them when they are travelling, and it saves students having to lug around books and notepads. In contrast to the desktop PC, it can be used almost anywhere.

Around the same time those home computers developed, email was invented. It is considered another milestone in the history of digitization. It enables the communication between several computers and the sending of files within a network, later also on the World Wide Web. The presence of both or all of the people was not necessary. Over the years, the immense potential of the e-mail was recognized, which resulted in more and more independent networks and, as a result, the desire for a large, shared network. With the birth of today’s Internet, the number of e-mail inboxes grew. The steady development of email continues to this day. The number has risen from around 32 billion to over 317 billion within ten years. In the following four years, from 2010 to 2014, the sum increased by a further 200 billion. This means one person sends an average of 6170 emails per year.

The Internet as we know it today has existed since 1989 and also made it possible for people outside of universities to access it. Before that, the networks were completely limited to research institutions and universities that wanted to share their results and information with one another. After the opening of today’s World Wide Web, it was possible for anyone to exchange information with other people in the world. Everyone was able to spread their ideas, thoughts and knowledge worldwide in a very short time. Due to the increasing number of people on the Internet, it has also become more and more interesting for companies. Companies began to present themselves with the help of homepages and to place advertisements on various pages. As a result, the first companies came into being that only operated on the Internet.

The number of domains, i.e. websites on the Internet, has risen from just under 1.8 million to over 900 million over the last two decades. Servers were created that enables data to be exchanged with large amounts of files, as well as discussion forums and chats in which one can exchange ideas with one or more people in real-time. This development of the Internet is known as “Web 2.0“. While Web 1.0. only served the companies to present themselves or spread news, Web 2.0 is defined by the interactivity of the user and the content generated by them. Companies, public institutions, etc. also recognize the advantages of the Internet and are offering more and more services via it. This means that libraries, parishes, and newsgroups on the Internet can be reached, as well as a variety of entertainment and commercial offers.

With the development of cell phones and, later, of smartphones, another very important milestone was created. The first cell phones were very bulky and bulky and were only used for making calls. This enabled location-independent communication. Cell phones were later able to send SMS (Short Message Service), which made communication possible regardless of the availability of the second person. With the further development of radio networks and cell phones, towards smartphones, it was also possible to connect to the Internet from the mid-2000s without paying high fees. From then on, you could surf and communicate on the Internet regardless of location and time. From now on, both the companies and the customers were available 24 hours a day for the company. 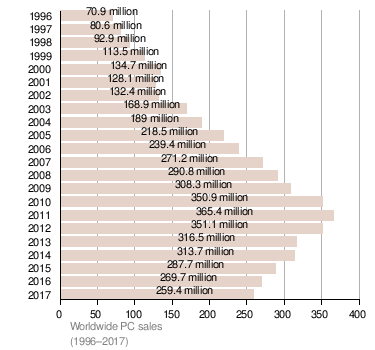 In Africa, South America and Southeast Asia in particular, basic needs were or are more important. The PC is too static and impractical for the way of life and work in the developing countries there. This problem has been solved with the help of smartphones. They are portable and do not require a LAN cable or WLAN connection to connect to the Internet. With the constant spread of smartphones and improved wireless networks, the total number of people connected to the Internet is increasing.

In both industrialized and developing countries, mobile phone contracts, and thus people with Internet access, have been increasing continuously since 2005. In contrast to industrialized countries, the number in developing countries has increased exponentially since 2010. The curve for the industrialized countries, on the other hand, shows that the increase is slowly flattening out and that the market is therefore increasingly saturated. Nevertheless, the market is growing steadily with the mobile Internet, which makes it more and more important for companies. Continued in next part.

This Article Has Been Shared 359 Times!

Articles Related to Effects of Digitization on Companies : Part II