Where Spy GPS Trackers for cars are legally allowed, they can send information to the owner wirelessly to the person watching where the car is. Previously we have written on car GPS and GLONASS. However, this is special article. Most of the common human on this Earth, specially the females are covered by the Governments higher security which is quite obvious from the movies. Here is Some Information on Spy GPS Trackers for Cars for Remote Security to Watch Whats Going on. Laws are mostly for curating the criminals. Most importantly, Laws in most countries protects the criminals’ basic rights – you can not break the head unless rape or murder is really happening. It is obvious from various Governmental spyware activities including PRISM and Snowden Reveals that the criminals are Goverment and we are in trap. Sadly, Internet became the enemy and website owners like us often face way to deliver some threat. You can not say against the Governments exactly like in Jesus Christ’s time.

Introduction to Spy GPS Trackers for Cars for Remote Security

Whether you will run to spray pepper or inform police or both, that depends on numerous variables.

Spy GPS Trackers use the Global Positioning System (GPS) to determine and track its precise location. The recorded data may be stored within the tracking unit or transmitted to the owner/central location data base using plain GPRS, SMS or satellite modem. Owner at owner/central location will be using some GPS tracking software. There are mainly three types of these devices :

Spy GPS Trackers for Cars Which are Sold on Ebay, Amazon at Cheaper Rate

Enough good at that price, taking it granted that the users of such devices need not to protect the location data to the third parties. These devices are suitable for 100% technology newbies but can be dual edged swords. They are not bad at all with limited budget and knowledge. It is prudent to use multiple device sets than one. Near ideal Spy GPS Trackers for Cars are – spy cigarette lighter GPS Tracker, spy mirror GPS Tracker etc. Cost is really lesser – $15 to $200 is the range. Invest time to find a cheaper Made in China stuff to test.

Data security is funny word for these devices. These are good to see whether the chauffeur wanting your daughter or wife as something other. Those Made in China stuffs has all thoughts while designing them. Keep in mind – presence of mind is most important to win from an odd situation. Sometimes win is impractical. These devices increases the chance of that win. It is definitely true that these cheaper Made in China electronics stuff gave common men across the World many things.

It is impractical for an ordinary man to follow our next method for kind of DIY Spy GPS Trackers for Cars. They will be great on security part but not easy to maintain and build the total infrastructure.

Basically the car is becoming like the connected cars. Rather the car is a part of your own LAN or WLAN. As GPS and GLONASS demands another assistance like transmission of video, satellite internet connection is appropriate for the work. The DIY device will house inside metal body part of the car, use solar system, battery as alternative sources of energy and send data to your server in encrypted way. It is basically powered by an IP Camera and the car factually have an IP address and you can use Dynamic DNS service like Dyn.

Obvious idea would be car IP camera and GPS powered by Raspberry Pi. Pure DIY electronics work but they can be tuned more to add autonomous features. Days are not far away to see autonomous cars as too common thing.

Author thinks that, from the point of criminal psychology, rapist or murder may switch on car stereo, those odd series of work may be used as trigger. Car parked plus sudden increase in volume of stereo when the car is out of normal route may a trigger. Weakest point of cars are the windows. It is difficult to break the windshield. At any country, tweaking for increasing physical security of a car breaks the laws. Except America and Middle East, no where civilians cars are checked under keeping the owner under the gun by Police. Carbon fiber is a good material for reinforcement.

Increasing the car security is fully different topic, but possibly this article on spy GPS trackers for cars helped by providing information to many anxious parents and spouses regardless of gender. 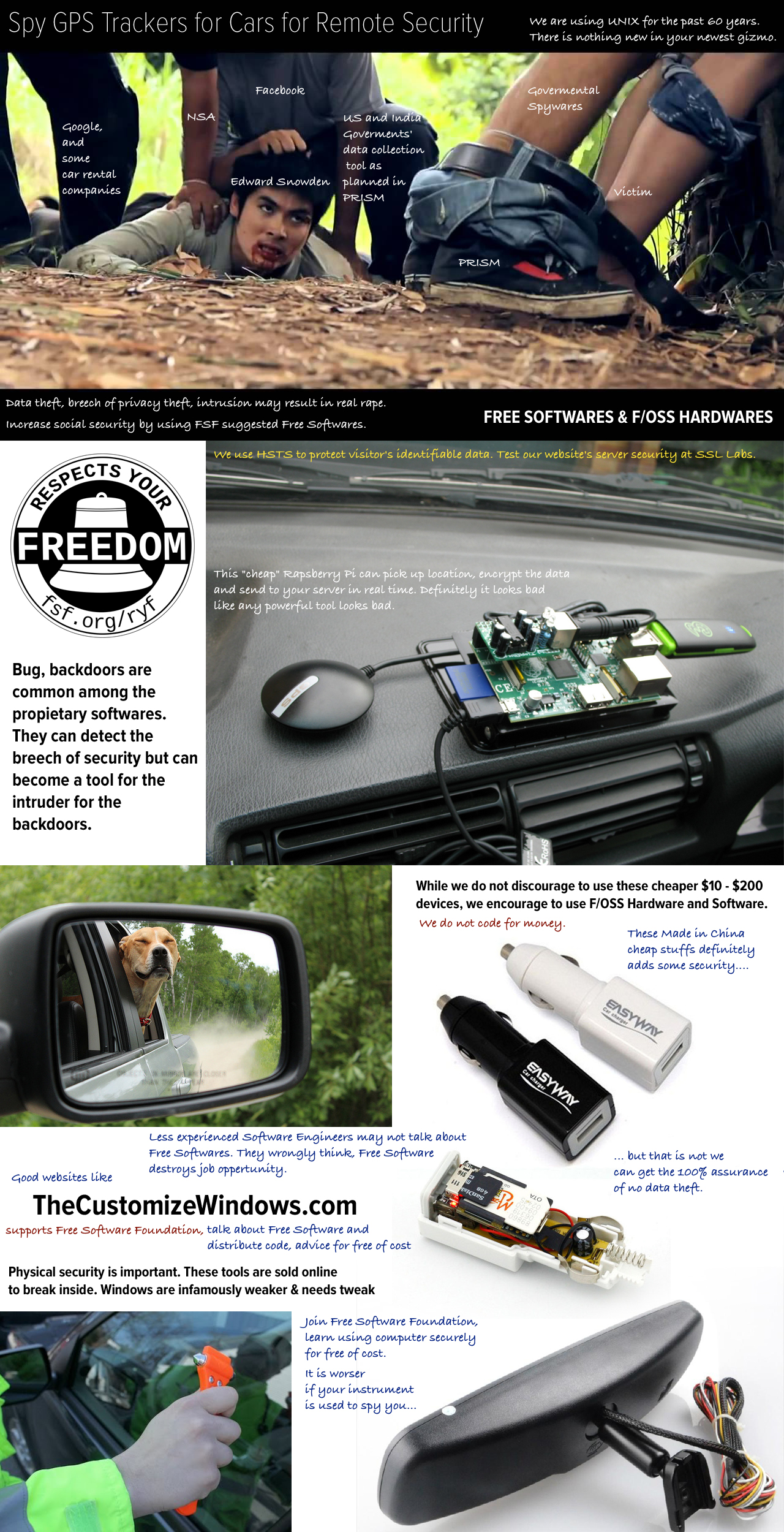